Easy ride to Georgetown today, about 60 miles. I got lost once I got into the city proper, but that’s normal. The monuments are much bigger than I thought they would be. Anywho, didn’t see too much crazy interesting scenery, though there was a shift in the terrain once I got to the Great Falls area. All of a sudden, things got much rockier and the forest got a bit more lush and tropical looking.

It’s good to be done, as my knees aren’t super happy with me at this point. Now that I’ve arrived in Georgetown, I can start looking for a place to live and getting ready for grad school, which might be a much more difficult task then riding 500 miles!

I checked on the scale and I lost five pounds on the trip, putting me at a nice even 200. 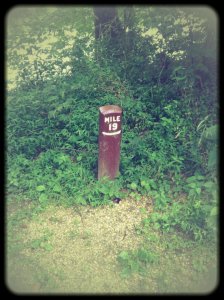 This is my last post to this blog, I have another I update regularly just blabbing about my life and stuff. If you want to check that out, you can go to twelvemi.com and read away.

I found a 5th Avenue candy bar today, which is likely the high point of my trip. 🙂

Rode about 75 miles today on the Chesapeake and Ohio Canalway, which is a national park. As I write this, I’m just overwhelmed by how wonderful the world is. DUMB AND CHEESY. Chalk it up to the candy bar I just ate but I’m pretty happy.

Met two guys, Alan and Andy, on the trail and rode about 40 miles with them. Really fun couple of dudes, they were two experienced cyclists, one a physics professor and the other a history professor, and I got all sorts of interesting factoids along the way. After they left, it was a little lonely. I had an imaginary conversation with my friend Dave, which was a little strange. Maybe going a little crazy.

God, is it ever swampy. Standing in the Potomac and watching the sunset makes it worth it though.

Sunset on the Potomac.

Easier ride today, though my knees were complaining a bit. Rode about 60 miles to Harper’s Ferry and am now chilling at the hostel there. It’s a nice homey place, with plenty of character.

Nothing that wild to report about the ride itself, other than I ate about 10 billion spiderwebs. I don’t know what these things’ deal is, why are they insistent on spinning webs right across the trail? What are they hoping to accomplish with one strand of web slung across the damn thing?

Tomorrow will be my last day riding.

How does the saying go? The spirit is willing but the body is weak? I had to stop about 15 miles outside of Cumberland because it was starting to rain and I was bone tired (still got about 78 miles though). There was only pay camping in Frostburg ($25/night!) so I just sprung for the hotel room that was $10 more. It’s not the prettiest place ever, but there was a bar next door where I could get french fries and a beer, which was the perfect end to a day.

I’m going onto the Chesapeake and Ohio Canal National Park tomorrow, so the trail’s likely to change a bit, but the good news is that it’s all downhill from here. I hit the highest point on the trail yesterday, and now it should be easier sailing to get to DC.

A little lonely out here, not very many people on the trail, which is nice, but I’m starting to wish for a little human companionship  Guess I’m a people person. I’ve made a goal not to listen to any music or podcasts or anything like that while I’m biking, and all the head time has given me quite a bit of time to think, which is good. I’ll write a bit more about that later.

Got a new bike pump and another pair of underwear. Should be good to go now. 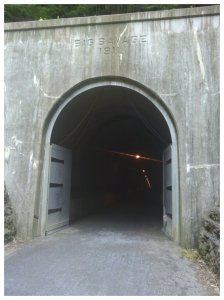 I discovered all of the post-processing features on my phone. Get ready for some fly-ass photographs 🙂

Did around 65-70 miles today, I arrived in Connellsville, PA around 8. I’m going to try to get to Cumberland, MA (the end of the GAP trail, 91 miles from here) tomorrow. Now that it’s just me and the trail, I won’t have to worry about losing time jumping on and off the highway, avoiding getting hit by traffic. The trail is pretty nice and level, so I can get into a nice mediative state after a little while, which is pretty nice. Giving me time to think. Bought some gloves and new handlebar grips to help with my numb hands. Also going to need to locate a new frame pump, as my old one just fell apart and some of the pieces fell onto the trail somewhere without me noticing.

Also, I seem to have lost one of my two pairs of underwear. Probably fell off when it was drying on the back. I need to secure my loads better. Dammit.

The river I’ve been passing by all day is called the Youghiogeny (I have no idea how you’re supposed to say that, maybe yough-ginny?) My knees are feeling better, and I’m really enjoying the trip.

Discovered my frame pump was broken when I stopped to help a guy named Bill with a flat on the side of the trail. We managed to jerry-rig something together and he gave me a map.

In other news, I had birthday cake ice cream for the first time. Pretty good, though maybe only one scoop next time. 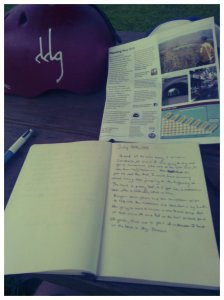 oooooo, how romantic of me. 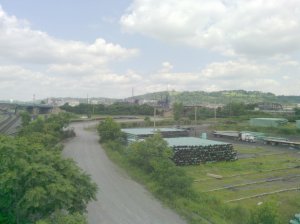 Just looked over my mileage. I went about 80 miles tday. Pretty awesome. I’m highly satisfied after yesterday. I suppose that the first day is always the worst. My front rack broke off first thing in the morning and about decided to hitch a ride home, but after careful redistribution, I managed to get everything onto the back of the bicycle. We’ll see how it works. A man named Terry is letting me use his backyard as a campsite outside of Jewett, Ohio, a town that looks exactly how it sounds. I’ve passed through about a billion of these small towns, and I really enjoy it, even though I get strange looks from the locals when I scoot through on my bike.

Beer and Pepsi have taken on a new meaning in this heat.

Writing this from a comfortable little hotel outside of Pittsburgh called the Neville Motel. Run by a very nice older lady, and also very affordable. I figured because it was cheap, I’d spring for it, get a chance to take a shower and wash my clothes in a sink.

Did around 65-70 miles today, would have done more, but damn, there were a lot of hills. I’m not Lance Armstrong and this isn’t the Tour de France, because I am walking my bike up these hills. Bought a pizza, ate the entire thing. Feeling pretty good.

So far, my bike’s holding up well. My knees are bothering me a little bit, and my palms are starting to get numb, both things that would be expected.

Selfie at the motel.

In line with every thing anybody ever says about the first day of a trip not being that nice, here we go:

Got off the train at 6am this morning. It took me a minute to get out of Cleveland proper, no thanks to my Google map directions, which were pretty confusing. It’s been raining all day, with no sign of it letting up any time soon. The rain really slows you down to a crawl, and I had to throw on my poncho and all my protective gear for my bags. I think I clocked about 50 miles, which was a little less that I was hoping for, but hey, no big deal.

The Erie Canal isn’t that nice looking. Pretty swampy most places. There was a part that I really liked, a bunch of little houses along the canal that had crazy decorations all over the place. One house was painted red, white and blue and had “God Bless America” painted on the side in giant letters; additionally, the satellite dish on the roof was outfitted to look like an anti-aircraft gun, with stenciling that said “USS Patriot.”

For dinner this evening, I  have reverted back to age 12–doughnuts, cheesy crackers and apples.  I got lost a little in Barberton, OH, and ended up in Norton, OH, which is where I’m going to stay I think. I could only find one hotel, and it was full, so I think I’m going to sleep in the Norton Panther’s Softball team’s dugout.

FYI, I didn’t get killed or anything. The benches were pretty uncomfortable, but I didn’t get rained on. At a Dunkin’ Doughnuts right now, stay tuned.

Where I started the Erie and Ohio Canal Towpath

July 25th, 2013
Boarded the train around 3:30am. It was rough saying goodbye to the family. I’ve never been that great at goodbyes, and this time was no exception. I’m going somewhere where I don’t really have any friends, so it kind of felt like I was leaving my last connection behind.

On the train, I thought I got lucky and scored two seats to myself, which turned out to be wrong when at 5am I was shaken awake by a man calling himself “Mr. T” who informed me that he wanted the window seat. I discovered later that this guy’s seat was somewhere else, and he wanted to sit next to the window, but because I’m a pushover, I let him sit there, where he proceeded to talk extremely loudly about why he likes the train (getting to stand up and move around, earning mileage points). He couldn’t seem to figure out how to use the reclining function on his seat, so I helped him with that as well. He kept talking until around 6am, at which point I think he got bored with me going “uh-huh,” “yeah” and “ok.”

Nothing feeds a deep sense of ennui like riding on a train.

July 26th, 2013
MORE TRAIN. I finished reading my book, and now I am spending my time revising some pages from my book. I’ve eaten nothing but granola bars, cherry tomatoes and tortillas with peanut butter. I have no idea why I selected these as my train foods.

I’ve found an optimal sleeping position. I find if I put the little footrest up and turn onto my side, I can make a sort of “s” shape with my body, which give optimum comfort. Keep that in mind if you find yourself on the train and are a tall lurpy dude.

Now I’m sitting in Chicago Union Station. I went and got a falafel, which is highly satisfying. I think I should only speak about the food I eat for the remainder of my journal entries.  Also, train bathrooms are gross.

Ok, boarding a new train now. Will resume writing tomorrow after I’ve done the first leg of my bike journey.

Derpin' on a Bike
Blog at WordPress.com.