In line with every thing anybody ever says about the first day of a trip not being that nice, here we go:

Got off the train at 6am this morning. It took me a minute to get out of Cleveland proper, no thanks to my Google map directions, which were pretty confusing. It’s been raining all day, with no sign of it letting up any time soon. The rain really slows you down to a crawl, and I had to throw on my poncho and all my protective gear for my bags. I think I clocked about 50 miles, which was a little less that I was hoping for, but hey, no big deal.

The Erie Canal isn’t that nice looking. Pretty swampy most places. There was a part that I really liked, a bunch of little houses along the canal that had crazy decorations all over the place. One house was painted red, white and blue and had “God Bless America” painted on the side in giant letters; additionally, the satellite dish on the roof was outfitted to look like an anti-aircraft gun, with stenciling that said “USS Patriot.”

For dinner this evening, I  have reverted back to age 12–doughnuts, cheesy crackers and apples.  I got lost a little in Barberton, OH, and ended up in Norton, OH, which is where I’m going to stay I think. I could only find one hotel, and it was full, so I think I’m going to sleep in the Norton Panther’s Softball team’s dugout.

FYI, I didn’t get killed or anything. The benches were pretty uncomfortable, but I didn’t get rained on. At a Dunkin’ Doughnuts right now, stay tuned. 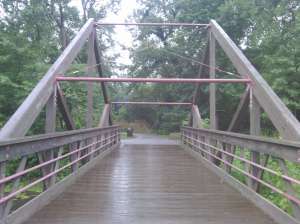 Where I started the Erie and Ohio Canal Towpath